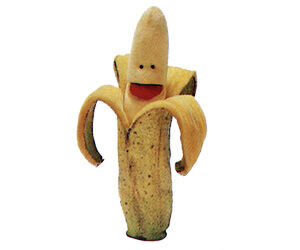 Bananas are a fruit that grow on trees in tropical regions of South & Central America. Of the various types of banana, the Cavendish is the most prominent, having been cultivated in the 19th century by farmers. The banana is often the source of comedic references due to its shape and the slippery texture of its inner peel. It is often inserted into ears by various Muppets for comedic effect.

The banana first appeared backstage on The Muppet Show in episode 103. Performed by Frank Oz, he was featured alongside Gonzo, Joel Grey, and Joel's hat in the episode's Guest Star Gag.

The banana later became part of the Singing Food, and would become fixtures in the background of several Muppet productions over the years. A pair of bananas tell jokes on Fozzie Bear's page on the DXD version of Muppets.com.

The banana was released as a pack-in with the Swedish Chef Action Figure in the ninth series of Palisades Toys' line of action figures.

Multiple bananas have appeared on Sesame Street, both as part of the singing food, and individually. A group of bananas dressed as Carmen Miranda sang the song "One Banana", as well as a bunch of bananas still hanging from their tree.

The Top Banana visited Elmo's World in a segment dedicated entirely to bananas. 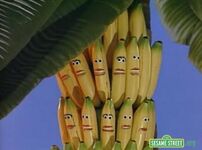 A bunch of bananas from "One Banana" 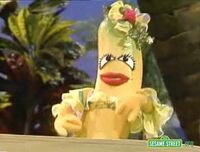 In the Mopatop's Shop episode "Mischievous Monkey," a large banana was seen in the possession of Fred Forget-It. (YouTube)