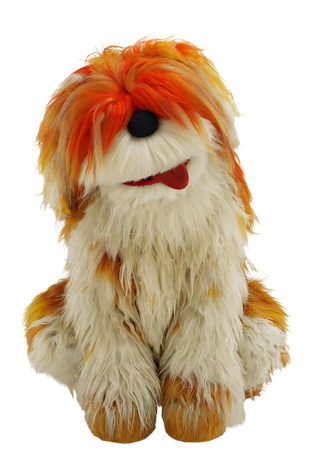 Barkley is a full-bodied Muppet dog who appears on Sesame Street. Barkley was originally called Woof-Woof when he first appeared in Season 9. In the 10th season premiere, the cast voted to rename him Barkley.

Barkley is energetic and playful, but is not anthropomorphized in the way that Rowlf and other characters are. While he may exhibit human-like emotions, he communicates only through barks, yelps, and physical contact. He was Linda's dog and understood the American Sign Language signs for "sit" and "stay." However, Barkley also had a close relationship with Big Bird. Indeed, in the 1993 book Imagine... Big Bird Meets Santa Claus, the large bird refers to Barkley as his dog. Although Linda has since moved on from Sesame Street, Barkley has remained, presumably becoming a ward of the community as a whole. The book A Bird's Best Friend shows that Granny Bird brought Barkley as a puppy for a present for Big Bird.

Barkley's appearances in television specials include the 1978 A Special Sesame Street Christmas and the 1979 A Walking Tour of Sesame Street. More prominently, he accompanied Big Bird on his trips to China in 1982 and Japan in 1988. He also appeared with the Muppets en masse on Night of 100 Stars. Additionally, for many seasons (until 1992), the Sesame Street closing credits depicted Barkley running through a park with the Kids.

Barkley somewhat disappeared in the series after the start of the 21st century, but returned in the 40th season premiere, being walked (or ran) by Bob. He also made a cameo in one episode the following season and made an appearance in a season 43 episode.

In a season 19 episode, Elmo has a new pet fish that he names Barkley.

Original performer Toby Towson claimed, in a 2003 Wikipedia edit, that the full-bodied puppet character was initially conceived as an acrobatic ape.

According to Sesame Street: A Celebration - 40 Years of Life on the Street, the writers had created the character as a pretty savvy canine who knew how to count and had an almost human intelligence, but performer Brian Muehl thought that he should be portrayed like a regular dog.[1]

While inside Barkley, the performer wears stilts on both arms.[1] In order to make his mouth move, the performer must pull a trigger on one of its stilts to close the mouth, and tilt his head to make it open.[1]

Barkley was Brian Muehl's favorite character to perform, along with Telly. According to him, the large canine "was the apogee of my mime roots and was pure visual puppetry."

Retrieved from "https://muppet.fandom.com/wiki/Barkley?oldid=702165"
Community content is available under CC-BY-SA unless otherwise noted.