Batman is a DC Comics superhero who first appeared in Detective Comics #27 in May 1939. His true identity is Bruce Wayne, billionaire industrialist, playboy, and philanthropist. Witnessing the murder of his parents as a child led him to train himself to the peak of physical and intellectual perfection, don a costume, and fight crime. Unlike many other superheroes, he does not possess superhuman powers or abilities; he makes use of intellect, detective skills, technology, and physical prowess in his war on crime.

Batman appeared in several Sesame Street segments in animated form (voiced by Olan Soule). In an Ernie and Bert sketch from the first Sesame Street test pilot, Ernie wants to watch Batman on TV, but Bert wants to watch something else. Batman interrupts them, suggesting they take turns in selecting a television program.

Batman was joined by Robin (Casey Kasem) in several animated segments (produced by Filmation) which debuted in the end of the first season. Gerald S. Lesser explained the selection of the dynamic duo when he said "some celebrities such as Batman and Robin are enlisted because of their unassailable authority with four-year olds."[1]

Batman, as portrayed by Victor Joel Ortiz (uncredited), appeared as a special guest in episode 104 of The Not-Too-Late Show with Elmo. The house band scores his entrance with a pastiche of the theme song of the 1966 Batman series. After sitting down for a short interview and playing "Beach Ball Ballyhoo" with Elmo, Batman makes his exit when the Bat-Signal flashes on the curtains. 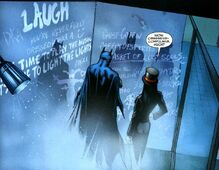 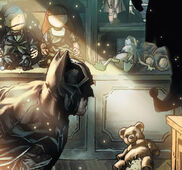 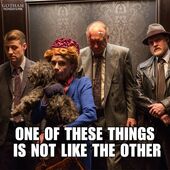 Batman: The Adventures Continue #15 (2020) by Alan Burnett and Paul Dini 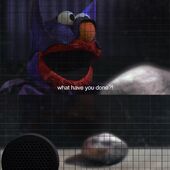 Elmo as Robert Pattinson's Batman: "what have you done?!"

The 1982 book-and-tape set Batman and Robin the Teen Wonder: The Case of the Laughing Sphinx

Other cast/crew in Muppet/Henson productions also appeared in Batman-related works.

Visit the:
Batman Wiki
Wikipedia has an article related to:
Batman
Community content is available under CC-BY-SA unless otherwise noted.
Advertisement