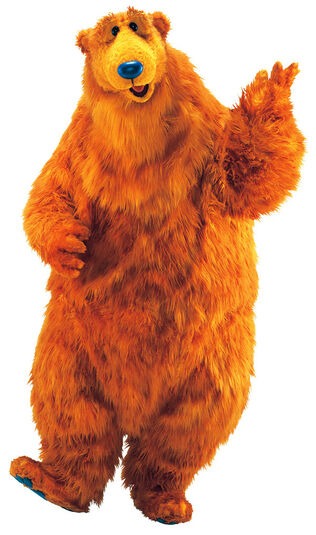 Bear is the ursine title character from Bear in the Big Blue House. Bear greets television viewers, who he often addresses directly by facing the camera, with an appraising sniff and the information that he likes the way they smell. He has a strong sense of smell and loves to sniff things, but he enjoys his other four senses as well. Bear oversees everyone at the Big Blue House. Bear has a warm, caring personality somewhat similar in style to Fred Rogers and a well-ranged singing voice.

Bear does not have any children of his own, but seems to have a way with the younger members of his circle. He is full of good advice and warm, caring love. Bear never seems to get angry and often seems laid-back, but he loves to get up and dance the cha cha. He also has an advanced vocabulary and is ready and willing to teach it to others.

Bear is a full-bodied Muppet. The Bear costume weighted 45 pounds. According to Noel MacNeal, it was very comfortable and easy to move around in.[1] In the fourth season, the puppet's eyes underwent a design shift, from circular to more pointed.

Like Big Bird, Bear was performed with MacNeal operating the head with his right hand and a string attached from the right arm to the chest to the left hand. He wore a monitor strapped to his chest to see what Bear was doing.[1] In a Tough Pigs interview, Noel MacNeal spoke a bit about the device: