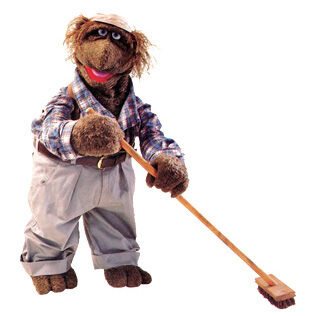 Beauregard is the dim but lovable janitor at The Muppet Theatre who took over the mantle from George the Janitor beginning in episode 310 of The Muppet Show. He also does duty as one of the stagehands, sometimes assisted by Beaker. Although he tries to be helpful, his dimwitted efforts frequently result in disaster. Affectionately known as Beau (or Bo), his slow wit is often exploited by characters who use him to their own purposes. He has a characteristic blink and often turns to the camera and says, "Right." Bo has immense strength, which is illustrated by his ability to effortlessly lift and carry around objects that are far too heavy to carry, such as an anvil, couch or piano.

Bo appeared onstage in various sketches and skits, including an appearance in the Veterinarian's Hospital sketch in episode 501, and played harmonica in a handful of musical numbers. Other times, Beauregard appears accidentally on stage during productions, still working on the props until he realizes he is intruding and must either rush out of sight or attempt to blend in with the action.

It's revealed in the 1984 stage show The Muppet Show: On Tour! that he calls his mop "Belleregard." The pair performed the Irving Berlin song "Cheek to Cheek".

In the book Of Muppets and Men, Dave Goelz explains that Beauregard was based on the clumsy Wendell Porcupine from Emmet Otter's Jug-Band Christmas. The main reason why Bo never became a star was because the writers thought he was too passive; he didn't desire anything. This made Beauregard difficult to write for.

In The Muppets, Bo was found sweeping up in a closet of the Muppet Theatre; he had apparently been in there since the place was abandoned years prior, but was completely unaware of the theater's abandonment, asking Scooter where everybody had been.

In Muppets Most Wanted, Bo is the engineer of the train that guides the Muppets through their world tour. Upon leaving Los Angeles, he starts the train going backwards.

Beauregard returned to the background for the 2015 The Muppets, sweeping in the studio, but had a speaking part in Pepe's game show segment in the second episode of Muppets Now.

In Muppets Haunted Mansion, Bo plays the ghostly role of one of Constance Hatchaway's murdered husbands. Donning a very thick handlebar mustache, he serves as the special's counterpart to George, the last of Constance's husbands in the attraction.