Bel is an imaginative hot pink monster girl who co-stars on the 2007 revival of Vila Sésamo, the Brazilian co-production of Sesame Street.

Bel is Garibaldo's best friend. She has an inquiring mind, asking questions but often coming up with her own answers.

When Vila Sésamo was discontinued, Bel was retained for the country's new co-production, Sésamo. She also appears, alongside other international and American characters, in videos for the "Dream, Save, Do" initiative. 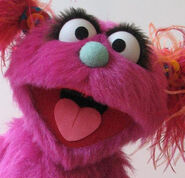 Add a photo to this gallery
Retrieved from "https://muppet.fandom.com/wiki/Bel?oldid=1223431"
Community content is available under CC-BY-SA unless otherwise noted.