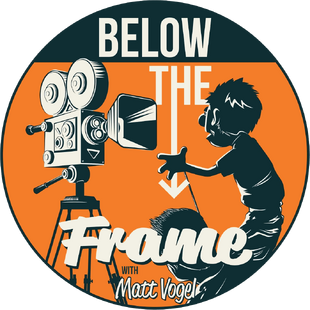 Below the Frame was a Facebook Live program created by Matt Vogel and Stephanie D'Abruzzo. It is now an audio podcast hosted by Vogel with regular appearances by his son Jack Vogel.

Vogel hosts the series while D'Abruzzo produces (and performs) the show's theme and incidental music, as well as special video segments. The series was developed during production of Season 48 of Sesame Street in 2016, with the first episode premiering on November 17 (the format had previously been experimented with by Vogel and the cast on November 4).

In March 2020, Matt Vogel announced on social media that the show would be transitioning to a podcast format, which launched in August 2020. The focus expands to discuss the Muppet characters owned by the Walt Disney Company in addition to Sesame Street. The podcast features recurring segments, such as "Injury Corner" and "Ask a Puppeteer About Not Puppets," commercial parodies about puppetry techniques, and archival songs and stories by Jerry Nelson.