Ben-Hur is a 1959 film based on Lew Wallace's 1880 novel Ben-Hur: A Tale of the Christ. The book was adapted into a film, an animated film, and a Broadway play. The 1959 film won the Best Picture Oscar and ten other Academy Awards. 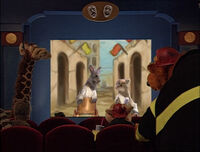 The chariot race scene in Bear in the Big Blue House.
Add a photo to this gallery

Wikipedia has an article related to:
Ben-Hur
Retrieved from "https://muppet.fandom.com/wiki/Ben-Hur?oldid=1081104"
Community content is available under CC-BY-SA unless otherwise noted.