Benjamin Franklin (1706-1790) was a scientist, printer, statesman, humorist, and one of the most familiar of America's founding fathers. His innovations include the lightning rod, the Franklin stove, and forming the first public lending library and fire department in America. As a diplomat, Franklin served as ambassador to France, where he became a beloved celebrity, and was crucial in garnering that nation's aid during the American Revolution. 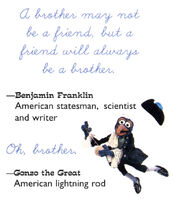 Wikipedia has an article related to:
Benjamin Franklin
Retrieved from "https://muppet.fandom.com/wiki/Benjamin_Franklin?oldid=1244922"
Community content is available under CC-BY-SA unless otherwise noted.