Bernard Crawford is a noted veteran Broadway producer in The Muppets Take Manhattan. He makes an agreement with his son, Ronnie Crawford, to allow him one chance at being a Broadway producer. When Ronnie wants to produce Kermit's musical, Manhattan Melodies, he signs his father's name to the acceptance letter, fearing that Kermit wouldn't meet with him otherwise. The senior Crawford wasn't too thrilled with his son producing the musical, although his initial assumption upon seeing Ronnie and Kermit together was even more dire: "If you two are in love, I don't want to hear about it."

Bernard Crawford fulfills his bargain, paying for the lighting and scenery, but on the condition that the show open within two weeks of making the deal to produce Manhattan Melodies. On opening night, he shares a brief moment with his son, exhibiting pride at this theatrical culmination, even if it is one that involves frogs, dogs, bears, chickens, and whatevers. 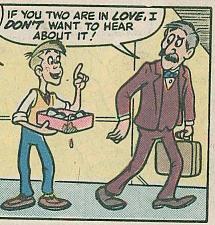 Bernard Crawford, as seen in the comic adaptation
Add a photo to this gallery
Retrieved from "https://muppet.fandom.com/wiki/Bernard_Crawford?oldid=1081116"
Community content is available under CC-BY-SA unless otherwise noted.