Bert's New Collection is a 1988 Sesame Street storybook featuring Bert and Betty Lou, designed to teach about sorting and "what belongs together." It showcases Bert's penchant for collecting, from his famous collections of bottle caps and paperclips to lesser known passions, such as argyle socks, sponges, and hats with feathers.

Bert even has a song to sum up his hobby: "Collecting rulers is groovy! Collecting sponges is mellow. Erasers, paper clips, bottle caps, too! Oh, I'm such a happy fellow!" Apparently this dates back to childhood, with Luis starting Bert on collecting rulers and Herry Monster introducing him to Figgy Fizz bottle caps. 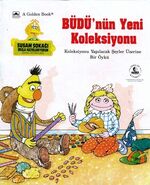