Betsy Baytos (b. August 27, 1956) is a dancer who joined The Muppet Show during the last season to perform Betsy Bird, a character created to showcase her dancing. Baytos was considered "an eccentric" dancer in the style of Ray Bolger. She could do splits vertically as she danced, with a loose-limbed and comedic style.

Betsy Bird had two dance segments in Episode 505 with James Coburn, with Betsy providing dancing, voice and choreography. Betsy continued on as a Muppeteer and voice during season 5, performing - for example - pigs, a cow and a singing fish in Episode 524 with Roger Moore, as can be seen in the documentary Of Muppets and Men. She performed a pig and Timmy Monster in Episode 504 with Shirley Bassey. She performed "right hands" for characters like Kermit and Fozzie, and helped research vaudeville material and jokes for head writer Jerry Juhl.

Betsy began her career as a feature animator for Disney Studios, where she promoted animated films and danced with an animated Thumper (from Bambi). The combination of Betsy's animation background and eccentric dancing led her to animation choreography, staging the live-action reference dancers for several animated features, including Disney's The Princess and the Frog.

Betsy continued her work with dance and puppets, performing at the American Dance Festival 'Salute to Vaudeville', the Steve Allen Show, designing and choreographing puppets for Shelley Duvall's Fairy Tale Theatre, and featured in an eccentric dance specialty with a full-sized puppet 'Maurice', in Broadway's 'Stardust'. Her work has also encompassed the Coca-Cola Polar Bear licensing campaign and the 'Ready Kids' mascot for the U.S. Department of Homeland Security. She continues to design for Jimmy Buffett, John Fogerty and various other projects.

Betsy is now finishing her feature documentary, Funny Feet: The Choreography of Comedy, with the work-in-progress to be presented at the Motion Picture Academy of Arts & Sciences in 2015. The film, with over 50 interviews spanning seven countries, will tap into over 1,000 hours of eccentric dance footage she's collected. Bill Irwin performed at a Disney-sponsored event in 1996, hosted by Steve Allen, and will again join Betsy in the upcoming event at the Academy. Completed interview subjects include Red Skelton, Lord Lew Grade, Jerry Lewis, Marcel Marceau, Chuck Jones, Dick Van Dyke, Shirley MacLaine, Simon Callow, and Al Hirschfeld. Further screenings are expected in 2015. 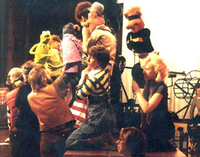 Performing a pig on the set of "Goldfinger" in episode 504 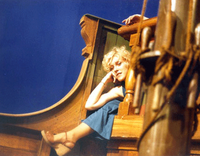 On the set of the pirate ship in episode 507 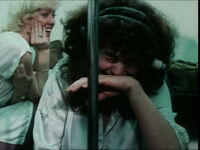 "Singing Fish" Louise Gold laughs with Betsy Baytos in background. From Of Muppets & Men: The Making of The Muppet Show 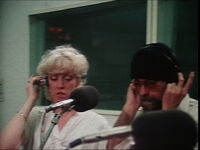 Baytos and Jerry Nelson recording "In the Navy" as seen in Of Muppets & Men: The Making of The Muppet Show
Add a photo to this gallery

Retrieved from "https://muppet.fandom.com/wiki/Betsy_Baytos?oldid=1158830"
Community content is available under CC-BY-SA unless otherwise noted.