"Between" is a Sesame Street song from the early 1990s, describing what the word means. The song was originally performed by Jeff Redd, with the filming style of chroma-key to demonstrate many uses of the word (cheese in the middle of two slices of bread to make a sandwich, driving in a car between the lines on a road, frosting between an Oreo cookie, and so on).

It was later covered by Wayne Brady in a 2003 episode. At the end of the song, he is joined by the Two-Headed Monster, Big Bird, Mr. Snuffleupagus, Dingers, Honkers, Cookie Monster, Baby Bear, Telly, Zoe and Rosita. At one point, Brady is squeezed by two slices of bread, one of them played by Bruce Connelly.[1] The modified lyrics for this version were written by Christopher Cerf. 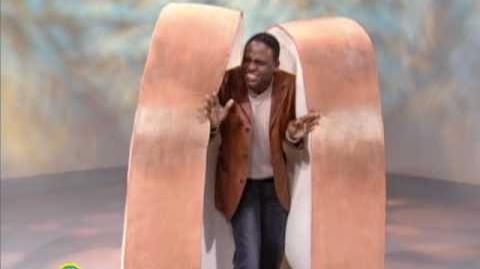 Retrieved from "https://muppet.fandom.com/wiki/Between?oldid=1208553"
Community content is available under CC-BY-SA unless otherwise noted.