Soprano opera singer Beverly Sills (1929-2007) guest starred on The Muppet Show in episode 409. Skits she performed include a rendition of "When the Bloom is on the Sage" with a tapdance interlude, and the opera "Pigoletto". She and Gonzo also practiced hanging spoons on their noses backstage, much to Sam the Eagle's horror.

She retired from performing at the age of 50, with an appearance in Menotti's La Loca, and accepted the position of General Manager of the New York City Opera. She joined the board of the Metropolitan Opera in 1991, and four years later became head of New York's Lincoln Center. 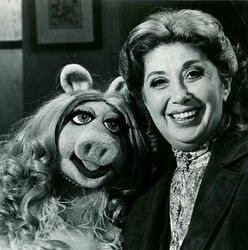 Wikipedia has an article related to:
Beverly Sills
Retrieved from "https://muppet.fandom.com/wiki/Beverly_Sills?oldid=1069483"
Community content is available under CC-BY-SA unless otherwise noted.