Bicycles have been featured prominently as a mode of transportation in a variety of Muppet productions and appear to be a particular favorite of Kermit the Frog.

The first instance of Muppet biking occurred in The Muppets Valentine Show, in which Kermit rode a bicycle in the "Froggy Went A Courtin'" number until he crashed it into a fence.

Kermit next rode a bicycle in Emmet Otter's Jug-Band Christmas. In the special's opening moments, Kermit cycles down a bumpy country lane before being blindsided by the Riverbottom Nightmare Band. A scale model bicycle was constructed for and ridden by a special marionette Kermit, created and operated by Frank Oz.[1]

In The Muppet Movie, Kermit begins the journey from his swamp to Hollywood on a Schwinn bicycle. This appears to be a full-scale bike, as opposed to the previously used puppet-sized ones. However, the same effects used in Emmet Otter's Jug-Band Christmas were applied in the filming of this scene.

In wide shots, a Kermit marionette was operated from a crane by special effects supervisor Robbie Knott.[2] In close-ups, Jim Henson operated a Kermit hand puppet from a low-rolling dolly. The two types of shots were intercut repeatedly to enhance the illusion.

The scene of Kermit riding the bicycle is the first in the movie-within-a-movie that features a Muppet in the real world; it's a striking image that captures the audience's attention.

“Every time I show the film -- whether it's to film students at USC or UCLA or I'm going to a festival -- that's always the first question: How did Kermit ride the bicycle? And my stock answer is: I put him on a three-wheeler until he got his balance, and then I put him on the two-wheeler.[3]”

“With The Muppet Movie, we had a very sophisticated bicycle rig that was a little radio-controlled car that was mounted in the bike between the front and rear wheels, and it had a mirror on it so it reflected the ground in front of the bicycle (as you saw from the camera's point of view), but it broke just before we had to shoot the bit, and so we ended up doing that with three strings from a camera crane, and there were many many takes and we ran out of time finally and never got it to work right. He was always kind of tilted on the bike -- if you look at the final take in the movie, he's not really riding a bike that's straight up and down, it's kind of tilted over to the side.”

The 2013 Blu-ray release of the film features a hidden Easter egg containing three minutes of multiple takes from the filming of the scene where Kermit enters the town in which he first spots a Doc Hopper's Frog Legs restaurant being built. The footage was also released as an "Extra" for The Muppet Movie on Disney+.

“It's amazing, though, you work and work on the most difficult things and people say, 'That's nice.' Then something easy will occur and it will be all anyone talks about! In the first movie it was Kermit riding a bike. It was very easy to do that. It was just a simple marionette with strings. In the same film there was that whole complicated sequence with Gonzo in the balloon, crashing into the sign and landing in the car. It took forever to film that -- and all the talk was about the bike! That's why we have a whole bicycle parade in (Caper ).[4]”

The Great Muppet Caper featured bicycle riding at the center of the musical set-piece "Couldn't We Ride." Kermit and Miss Piggy renew their courtship in a London park on rented bicycles and are soon joined by Fozzie, Gonzo, and a crowd of The Happiness Hotel denizens, riding close together.

Although marionette devices continued to be used in this sequence, the process was simplified when multiple bicycles were in the same shot. Two bicycles could be connected together with a stiff rod from axle to axle, eliminating the need to hold the bicycles up and enabling them both to be pulled from in front. In shots of the whole Muppet gang, the entire mass of bicycles -- all wired together -- was pulled by a fleet of over-sized tricycles and bicycles, ridden by Brian Henson and other performers. Another innovation in this sequence was the use of radio controls to move the characters' mouths in long shots.

Just as in The Muppet Movie, bike-riding Muppets were hand puppets in close-ups. Some shots featured Kermit in the foreground as a hand puppet, with Piggy as a marionette behind him, and other such mixtures of technique.

Jim Henson explained all this in the Jim Henson Hour episode "Secrets of the Muppets," adding that the rig that allowed Kermit and Piggy to ride their bikes around in opposite circles and then come up next to each other "was so complicated that you're going to have to figure that one out for yourself."

Scooter rode a bike in two brief scenes in The Muppets Take Manhattan, once during the song "Saying Goodbye" (in a wide shot), and again when looking for Kermit (in a close-up shot).

Kermit rode bicycles in The Jim Henson Hour opening (sampled from The Great Muppet Caper footage), Muppets on Wheels, and in a commercial for the Ford Hybrid. In the Ford Hybrid commercial, the bicycle was controlled by a green pole that was digitally removed later.

The Muppet Show episode 409 features a story about Kermit's bike getting stolen in The Muppet Theatre's back alley. His poor choice in parking spots would later be illustrated in a puzzle released by Milton Bradley (which later appeared in Before You Leap, although slightly altered).

Uncle Traveling Matt rides a bike (or, in his words a "Doozer construction horse") during his Postcards from Traveling Matt segment of the German version of the Die Fraggles episode "Pebble Pox Blues," before running over a rock in the road and plunging into a park lake in Munich, Bavaria.

Scooter and Janice also ride a tandem bicycle in the background of one scene in Muppet*Vision 3D.

Elmo interviews a Bicycle and Helmet in the Elmo's World episode "Bicycles."

Gary and Walter ride a tandem bicycle in The Muppets during the "Life's a Happy Song" opening number.

In the Muppet Babies reboot episode "Wocka by Fozzie," Baby Fozzie imagines himself growing up into his adult self (in silhouette) while riding a tricycle that turns into a bicycle. 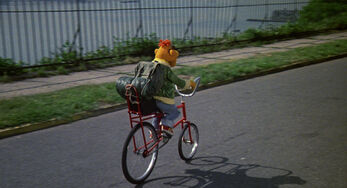 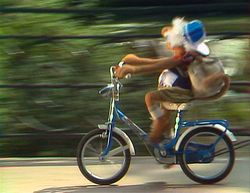 Traveling Matt in the German version of "Pebble Pox Blues" 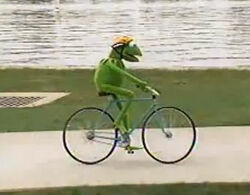 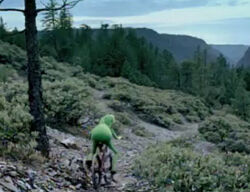 Kermit in the Ford Hybrid commercial 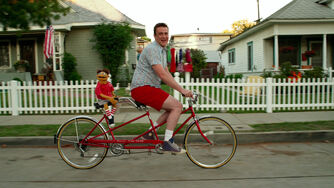 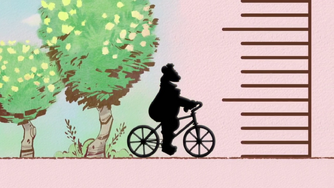 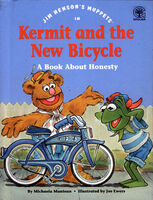 Kermit and the New Bicycle 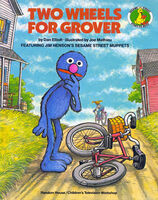 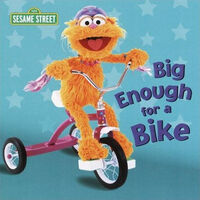 Big Enough for a Bike 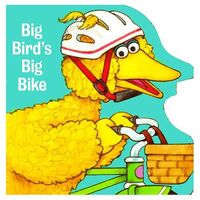 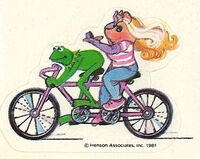 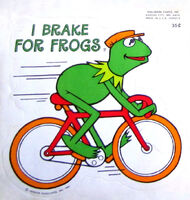 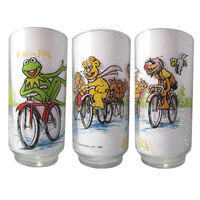 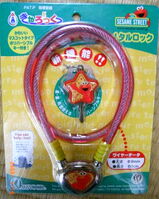 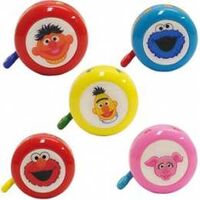 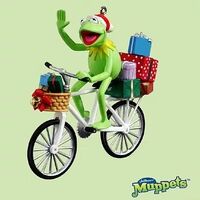 Wikipedia has an article related to:
Bicycles
Community content is available under CC-BY-SA unless otherwise noted.
Advertisement