Big Bird's Birthday or Let Me Eat Cake is a Sesame Street special which aired during the show's usual time slot on March 15, 1991, in most markets and in prime time during the week of March 9. The special was produced for the PBS pledge drive season, and stars Big Bird and Snuffy, as they go to the roller skating rink for Big Bird's birthday. Meanwhile, Cookie Monster is tempted to eat Big Bird's cake, but staves off his desire by eating everything else on the street. Celebrity guests included Bo Jackson, Robin Williams, Whoopi Goldberg, and Ray Charles.

When the episode aired on March 15, it was presented as a regular episode, featuring an episode number (2835) and added inserts to make it a complete sixty-minute episode. The theme and extra inserts were removed from the pledge drive version, which also featured an extra scene segueing to the pledge break featuring Telly Monster and Count von Count. 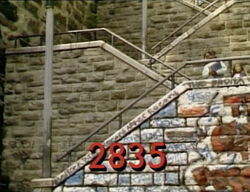