Big Bird's Nest is a 1998 Sesame Street book in the "Elmo's Neighborhood" series, in which Elmo chases a little black puppy all over Sesame Street. It was reissued in 2009 in the "Where is the Puppy?" series.

Elmo visits Big Bird at his nest and finds him looking all over for Radar. Elmo explains that he is looking for the little black puppy and they decide to search together. They look in Big Bird's bureau, which has some clothes and an old rusty pot. Elmo tells Big Bird the pot doesn't belong and puts it in a box to throw out. They look in Big Bird's mailbox, which has mail and a banana peel. Elmo adds the banana peel to the box. They look in the refrigerator which has lots of birdseed goodies and a broken clock, which Elmo adds to his box. They look in the nest which has a party horn, a pencil stub and a broken tennis racket ... and Radar. Big Bird is very happily reunited with his teddy bear while Elmo puts the other items into the box. They take the trash to Oscar. Then they sit down with some birdseed brownies to try to figure out where the little lost puppy is. 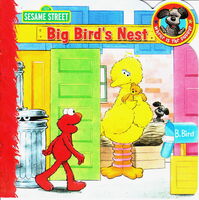 2009"Big Bird's Nest"
Where is the Puppy? series
Creative Edge/Dalmatian Press
ISBN 1403792011
Add a photo to this gallery
Retrieved from "https://muppet.fandom.com/wiki/Big_Bird%27s_Nest_(book)?oldid=1081355"
Community content is available under CC-BY-SA unless otherwise noted.