Big Bird's nest is the home of Big Bird on Sesame Street. According to Chris in Episode 4512, he has lived there ever since he was hatched.

Located to the right of 123 Sesame Street at 123½, Big Bird's nest was set off by a collection of doors and paneling. Brick walls from surrounding buildings set off the area, giving Big Bird complete privacy, though no roof. One of the windows of Susan and Gordon's apartment looked into the nest, and they acted as sort-of surrogate parents to him over the years. His bed is a large-scale version of a real bird's nest, made of sticks and twigs.

Many early scripts for the show refer to the space surrounding his nest as a "playground," as the kids were often seen playing on the colored barrels populating the area. The term was also used in dialogue from early episodes, including Episode 0209 and as late as Episode 1001.

The furnishings included crates, which serve as table space or benches for visitors, a bookshelf (containing such titles as March of Democracy, Preface to Philosophy, Principles of Chemistry, and Shattered Lamp), and a variety of diverse items. According to the book Sesame Street Unpaved, Big Bird's nest contains: a bubble gum dispenser, a clock with no hands, a feather duster, a football helmet, a golf bag with one club, a hurricane lamp, a megaphone, a Roman bust (which has occasionally worn his red neck tie), a tricycle wheel, a watering can, an old record player, an umbrella, a mailbox, and a pair of snowshoes. Prominent decorations include an alphabet chart and Mr. Hooper's picture. Among other objects not listed in the book, he has a small wooden alphabet sign, a jack-and-balls game, and a picture of his cousin Abelardo. The opening of Episode 0666 reveals that he also has a pull-string lamp. In Christmas Eve on Sesame Street, we learn that Big Bird also has heating pads and an electric blanket to help him stay warm during the wintertime.

When the set was given a complete makeover in 2002 following the hurricane in Season 32, Big Bird acquired some actual, colorful child-like furniture like a couple of multi-colored nightstands with drawers, a colorful bookshelf, and even a small wooden step-ladder to get into Big Bird's nest. Most of the original belongings of Big Bird's mentioned above have been removed with the exception of his snowshoes, and his mailbox (which is now repainted to no longer show his name on the side).

For season 46, Big Bird's nest area saw another makeover; the construction doors have been removed, and the nest itself is wedged in between the branches or a large tree growing out of the cobblestone-covered ground. Small shelves and other of Big Bird's personal items are nailed to the protruding branches.

The nest used in Elmo in Grouchland was built by Geoffrey Cormier of the movie's art department. The item was put on eBay, but didn't sell, so in 2005, it was placed for sale on his website.[1] That nest had thicker twisted branches than the contemporary television version.

View from around the corner

The nest used in Elmo in Grouchland

The inside view of Big Bird's nest

The playground area from the 1970s, made from old oil barrels 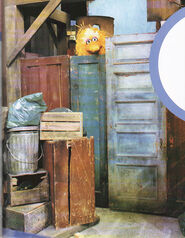 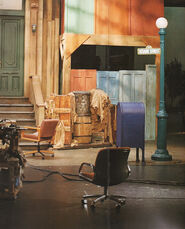 Big Bird sleeping in his nest

Big Bird outside his nest during its reconstruction after the hurricane

Angle of the nest area, with Gordon and Susan's kitchen window, as of the 1980s

An illustration of the original nest area (occupied by multiple colored barrels), as merged into a tall building during the 1972-1974 ending credits