Big Bird is tired of winter. He can't ride his unicycle, play in the sandbox or roller-skate. He decides to buy a bouquet of six flowers from Mr. Macintosh to decorate his nest to remind him of Spring.

On the way home, Big Bird stops for a cup of tea at the Count's castle. The Count enjoys counting Big Bird's flowers, and Big Bird impulsively decides to give the Count one of his six flowers, so he can count the petals.

Walking down Sesame Street, Big Bird meets other friends -- Maria, Grover, Oscar the Grouch, Ernie and Bert -- and cheers each of them with a flower. By the time Big Bird reaches his nest, he doesn't have any flowers left.

At first, Big Bird is disappointed, but when he turns around, he sees that the Street is now decorated with brightly colored flowers, held by his friends. Big Bird realizes that he's brought Spring to Sesame Street! 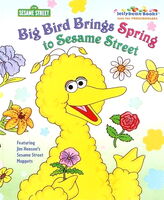 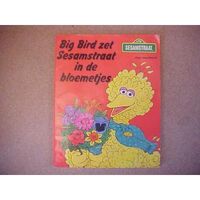 Big Bird Brings Spring to Sesame Street was adapted as a storybook video in Five Sesame Street Stories the same year the book came out, with Caroll Spinney and Frank Oz voicing their respective characters, and Fran Brill narrating. In the video adaptation, the order of the flowers Big Bird gives away is slightly different (although the other characters' reasons for wanting them remain the same); in the book the rose is the last flower he has left to give away, while on the video the iris is the last flower he sacrifices. Also, in the video version, Maria is called Dolores and voiced by Fran Brill (due to the absence of Sonia Manzano), and Mr. Macintosh is not seen, but briefly mentioned. The narrator also described Ernie and the Count's dialogue, since Jim Henson and Jerry Nelson were unavailable to do voices for the video.

Retrieved from "https://muppet.fandom.com/wiki/Big_Bird_Brings_Spring_to_Sesame_Street?oldid=1255791"
Community content is available under CC-BY-SA unless otherwise noted.