Big Bird Sings! is one in a series of character-centered Sesame Street albums released in 1974. Although some of the material comes from the earlier Columbia and Warner Brothers albums, some tracks appear here for the first time, including Big Bird reading some of his poems. Later editions of this album remove two tracks, The "J" Poem and Everyone Likes Ice Cream, and replace them with I Just Adore Four and A Really Good Feeling.

The later edition of this album was reissued as part of the 2-LP set Just Friends. 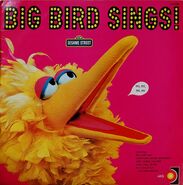 CassetteAustralia
Summit Records
8008
Add a photo to this gallery

Retrieved from "https://muppet.fandom.com/wiki/Big_Bird_Sings!_(album)?oldid=425757"
Community content is available under CC-BY-SA unless otherwise noted.