Big Bird in China is a 1983 special produced by the Children's Television Workshop which originally aired on NBC on May 29.[1] In the first international special based on Sesame Street, Big Bird is inspired by a Chinatown scroll, and the story of the legendary Phoenix. After coaxing the shopkeeper into lending him the scroll, Big Bird and Barkley take a slow boat to China. They soon make a new friend, little Xiao Foo, and receive enigmatic hints from the Monkey King.

Filmed on location in Beijing and elsewhere, the Great Wall of China and Mao's Tomb are amongst the landmarks shown. Also featured are assorted street dancers, cheerful Communists, and a song about saying "Hello" in Chinese.

The special was adapted into a book by Jon Stone.

“...But Big Bird's voice, prattling all the way, began to grate on this viewer early in the extended travelogue.

Fortunately China, in the form of its landscapes, its culture, and the most delightful on-camera youngster since Shirley Temple tap-danced down the stairway with Bill Robinson, saved the day. Six-year-old Ouyang Lianzi (sic) swoops down on the gawky old bird and flies off with the whole show...

If there is one lesson to be learned from this special, it is that Big Birds should be served in small portions. And as Miss Piggy herself might say, I have news for vous, 'Sesame Street,' your Big Bird simply does not have the charisma of moi.”
—Arthur Unger, The Christian Science Monitor. May 27, 1983

“Ronald Reagan has never been to China but Big Bird has been there twice. Might that perchance suggest a case of twisted priorities? By now, some of the Chinese may think Big Bird is president of the United States--or at least a semi-official State Department emissary. A Muppet without portfolio...

...For the kids there are -- kids. Cute little Chinese tots hopping around in various folk dances. Indeed, from the programs produced in China so far (including a Bob Hope special that marked B.B.'s first visit), a western viewer could get the impression that folk dancing is the major industry of the country. "Big Bird in China" shows little of city life.”
—Tom Shales, The Washington Post. May 28, 1983.

“Although the star's galumphing presence and endless prattling become grating, Big Bird in China is far superior to the insipid fare that constitutes most network children's programming. It offers not the contemporary China of bicycling millions but a vision of the mythic China of the imperial dynasties. Scene after scene unfolds exquisite landscapes that resemble the misty mountains and delicate waterfalls of Sung dynasty murals.

During almost three weeks of location filming in Chinese villages, the sight of Big Bird did not always bring smiles to local children, who after all had never seen Sesame Street. Some were frightened by his looming grotesquely over them; his bugged-out eyes sent others scampering. One little girl burst into tears. CCTV producers are hoping their viewers will not react similarly when a dubbed version of the production is broad cast, probably on June 1, National Children's Day.”
—Richard Stengle. "Innocent Abroad, With Feathers." Time. May 30, 1983.

Human Cast (as translated in the credits) 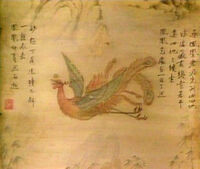 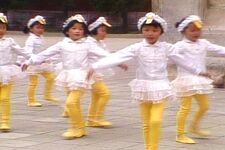 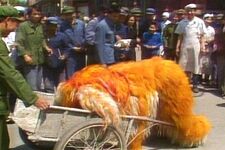 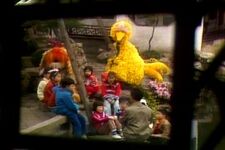 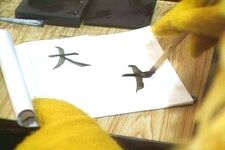 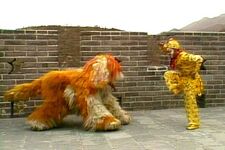 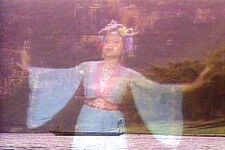 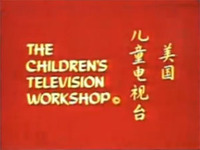