Big Bird in China is a 64-page hardcover book that tells the story of the 1983 special Big Bird in China. The book is illustrated with screenshots and promotional photos from the special.

In the story, Big Bird and Barkley travel to China to learn more about the phoenix, a beautiful Chinese bird that captures Big Bird's imagination. To find the phoenix, they follow the clues on an ancient scroll. The American pair soon gets lost in the new country, but they're rescued by Xiao Foo, a young girl who helps them follow the clues. Along the way, the group is guided by the Monkey King, a character from Chinese folklore.

At the end, Big Bird meets the phoenix, and learns that his quest was all part of the golden bird's plan to teach Big Bird all about China. Big Bird and Barkley say goodbye to their new friend Xiao Foo, and head for home.

The book clarifies some of the names and locations from the special. 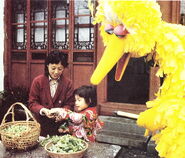 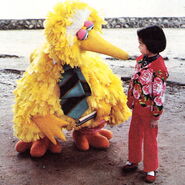 Add a photo to this gallery
Retrieved from "https://muppet.fandom.com/wiki/Big_Bird_in_China_(book)?oldid=1081295"
Community content is available under CC-BY-SA unless otherwise noted.