Walk-around version of Big Bird created for public appearances including Sesame Street Live and Sesame Place. Big Bird made his debut in walk-around form in the Ice Follies in 1974. The standard design was introduced in 1980 in Sesame Street Live, in which he wears a red and blue striped necktie. Other times, he wears a white tuxedo shirt. Big Bird was added to Sesame Place in 1986.

Big Bird as he appeared in the Ice Follies. Fabricated by the Muppet Workshop. 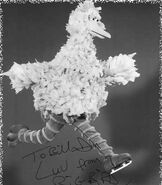 Big Bird as he appeared in Sesame Street Live and Sesame Place during the 1980s, fabricated by the Muppet Workshop. Big Bird made his debut at Sesame Place in 1986.

At a photo op session at Sesame Place 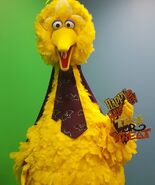 As a vampire, Halloween at Busch Gardens Tampa