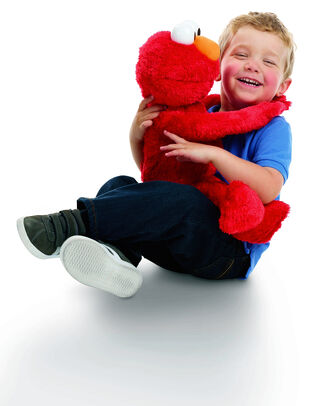 Big Hugs Elmo is an Elmo plush promoted as being the first that can hug back. Released in 2013 by Hasbro, under the Playskool label, the 22" plush toy curls his arms when hugged, plays imagination games when his left foot is pressed, and sings a lullaby when laid down.

The plush features vocal tracks by Kevin Clash, recorded before his resignation from Sesame Workshop.[1] Walmart promos for the toy featured the song "Give a Hug" performed by Ryan Dillon as Elmo.

Retrieved from "https://muppet.fandom.com/wiki/Big_Hugs_Elmo?oldid=1081409"
Community content is available under CC-BY-SA unless otherwise noted.