"Big Round Nose" is a Sesame Street song in which an Anything Muppet (played by Jim Henson) stands in a park and sings about his favorite kind of nose (the big, round kind) as he yanks the noses off of bystanders and puts them on his own face.

In season 30, the song was remade on a vaudeville stage, with Herry Monster singing lead vocals and using three monsters and a Honker as visual aids. (First: Episode 3806) A new intro was composed by Robby Merkin for this version. 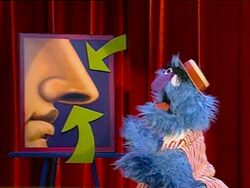 Herry's version
Add a photo to this gallery

Retrieved from "https://muppet.fandom.com/wiki/Big_Round_Nose?oldid=1302442"
Community content is available under CC-BY-SA unless otherwise noted.