Bill Prady (b. June 7, 1960) is a writer and executive producer who headed the 2015 ABC TV series The Muppets. Prady is now best known as the co-creator of the CBS series The Big Bang Theory, but his career in entertainment started at The Jim Henson Company.

Utilizing his background as a computer programmer, Prady started at Henson in the mid-1980s as a production assistant and researcher on The Muppet Institute of Technology. The project never came to fruition, but he moved over to Henson's licensing department working on various software projects with Christopher Cerf, including the Muppet Learning Keys.[1]

Eventually, Prady started writing material for the Muppets, the first of which was a speech given by Rowlf the Dog at the New York City post office for the dedication of the Love Stamp.[1] He wrote segments for the Muppet Meeting Films, consulted on scripts for the Muppet Babies Live! shows (receiving writing credit on the third, Where's Animal?), and served as an editorial assistant on the documentary Down at Fraggle Rock. He went on to write material for the Dial-a-Muppet service,[1] and ultimately wound up writing scripts for television, starting with two episodes of the animated Fraggle Rock: "Ambassador Gorg" and "Fraggle Fool's Day." This work extended to the View-Master Interactive Vision videos "You're the Director" and "Muppet Madness".

In print, Prady penned scripts for the Muppet Babies comics (including the Star Trek parody "Out of this World," "Upside Down Land," and several others), as well as comic stories for Muppet Magazine (including "A Doozer Dilemma" from the Fall 1988 issue).

Beginning production on The Jim Henson Hour, Prady and Juhl wrote the initial pitch shown to networks in order to sell the show. He later found himself on the writing staff, and contributed the script for Miss Piggy's Hollywood. That same year, he teamed with Jim Lewis to provide the story for the Muppets' appearance on The Cosby Show, and co-wrote the Muppets' segment for The Earth Day Special with Jerry Juhl.

In 1990, he worked on his last project with Jim Henson receiving sole writing credit on Muppet*Vision 3D at Walt Disney World, as well as the pre-show that plays in the queuing area for the show. Also for Disney, he wrote the "Pigerella" segment for Disneyland's 35th Anniversary Celebration featuring Miss Piggy as Cinderella. That same year, he wrote material for a proposed marketing campaign called "The Pig of the Nineties", which would have been an elaborate, years-long effort to reinvigorate Miss Piggy's popularity, but was cancelled after Henson's untimely death.[1]

Following Henson's passing, Prady wrote The Muppets Celebrate Jim Henson with Jerry Juhl, and published an editorial in tribute to Henson in the June 28, 1990 issue of Rolling Stone. In the following years, he contributed material for the direct-to-video productions Muppet Classic Theater (the "King Midas" and "The Boy Who Cried Wolf" segments) and Billy Bunny's Animal Songs, both with Jim Lewis. He also wrote (and appeared in 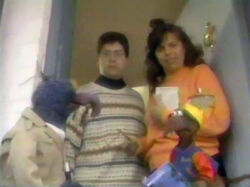 ) the 1993 Inaugural Celebration for Children to kick off Bill Clinton's first term as President of the United States, which featured several segments with the Muppets, and was credited as a Creative Advisor for the Muppet Treasure Island CD-ROM game.

Prady went on to become writer and producer on such series as Dharma & Greg and Gilmore Girls and is executive producer and co-creator (with Chuck Lorre) of the CBS sitcom The Big Bang Theory.

In 2006, Prady wrote and produced a short presentation pilot featuring the Muppet characters. The pilot for a possible series was shot in "mock documentary" style and focused on the Muppets' efforts to launch a network television series. The presentation pilot was directed by Bill Barretta and featured puppetry by Barretta, Dave Goelz, Steve Whitmire and Eric Jacobson.

In 2015, Prady returned to his pilot idea and shot a 10-minute presentation which was subsequently picked up by ABC to air in the Fall as The Muppets. Prady developed the series with Bob Kushell and served as producer.

Wikipedia has an article related to:
Bill Prady
Community content is available under CC-BY-SA unless otherwise noted.
Advertisement