An unnamed purple monster with one horn and one tooth debuted on the Ed Sullivan Show, as the son of Fred.

He later appeared in several sketches during the first season of Sesame Street, in one of which he was finally identified by the name Billy. 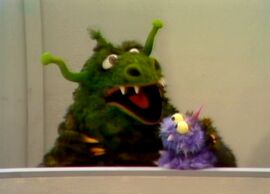 The monster father and son in their debut appearance on The Ed Sullivan Show in 1966.