Billy continually sings "Hoppity Boppity" as he does every day, much to his family's annoyance. As a solution, Billy's mother patiently advises his son to journey into the forest and learn some new songs from the animals, adding that he be home in time for dinner. At the video's end, the bunny family is gathered around for a carrot feast and Billy returns, having learned seven new songs. However, Billy decides to sing his favorite song "Hoppity Boppity" once more, and the rest of his family join in on the reprise.

A 1993 press release for the video mentions that Billy's extended family includes 14 aunts and uncles, and 36 cousins.

The puppets used for Billy Bunny's family have been seen as generic rabbits in various Muppet productions. Billy's brother and sister appear as background townspeople in Muppet Classic Theater. 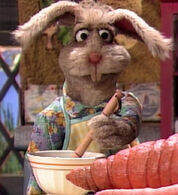 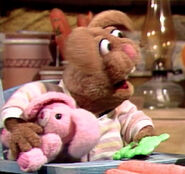 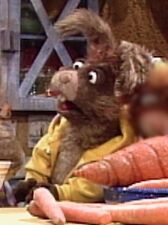 Sister
Add a photo to this gallery
Retrieved from "https://muppet.fandom.com/wiki/Billy_Bunny%27s_family?oldid=1081463"
Community content is available under CC-BY-SA unless otherwise noted.