Bip Bippadotta is a character on Sesame Street who is the counterpart of Mahna Mahna from The Muppet Show. Although both characters are best known for performing the nonsense song "Mah Na Mah Na" and have the same performer and voice, they have always been portrayed by different puppets and were usually considered separate entities.

When "Mahna Mahna" is performed on Sesame Street and related albums, the song is actually called "Mah Na Mah Na," with lead vocals provided by a character also called Mah Na Mah Na. This character, a Reddish-Magenta Little Anything Muppet, was the prototype for Bip Bippadotta. Unlike his counterpart Mahna Mahna, who premiered on The Ed Sullivan Show at roughly the same time, Mah Na Mah Na wore a sweater, and had dark brown hair and standard Muppet eyes. His back-up vocals were provided by Green and Purple Anything Muppet girls, who sing "pa tee, pa tee pee" instead of "do doo, do doo doo" like the Snowths who usually accompany Mahna Mahna. The puppet for the character also appeared in two other season one skits with the letters "O" and "U."

The puppet would go through many evolutions and eventually look much more like Mahna Mahna than this first incarnation. First, he was changed to a Pumpkin Orange Little Anything Muppet with orange hair and a furry green tunic in season 5. In season 16, the character made a comeback appearance now more closely resembling Mahna Mahna, depicted as a Lavender Anything Muppet with sunglasses to cover his eyes, as opposed to the blinking eye feature on Mahna Mahna. One season later, Bip became a Purple Anything Muppet, matching Mahna Mahna's fleshtones much more, and remained that way for his remaining appearances until 2009.

Unlike Mahna Mahna, who was almost exclusively associated with the song after which he is named (or perhaps the name after which he is songed), Bip Bippadotta has performed a variety of songs on Sesame Street, which were "Fat Cat," "None Some All," "Everybody's Song," "Scratch My Back," "Opposite Stuff," and "Air."

Bip later made a cameo appearance in Episode 4203 in 2009, where he is seen as a Lavender Anything Muppet again in the laundromat watching the race and says "Mahna Mahna." Here, he was performed by John Kennedy. 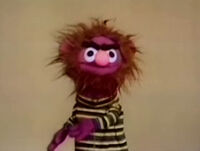 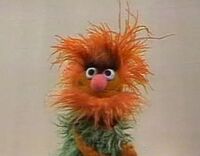 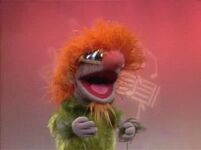 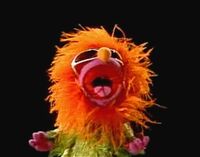 Purple Anything Muppet from the mid-late 80s. 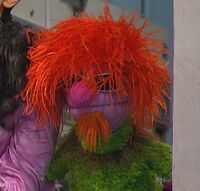 Revised Lavender Anything Muppet in 2009. 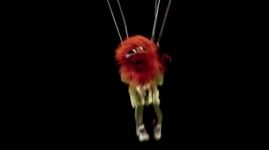