Birdland is a jazz club on Sesame Street owned and operated by Hoots the Owl, who typically performs with the house band (the Owl-Stars) or introduces many of their nightly acts.

An early incarnation was first mentioned in Episode 2209 as a club where Hoots used to hang out with Grandma Harriet in Detroit. The Sesame Street location opened the following year and was first seen in Episode 2260.

Though many humans, Grouches and monsters attend the club, the joint's main clientele are birds. This is heavily reflected by their menu, which offers such avian delicacies as caterpillar tartar and stuffed grasshopper. The club is also known to throw the occasional "Open Stage Night," where amateur performers can show their stuff.

Birdland primarily existed as an interior location. In season 25, when the show expanded Around the Corner, the club was given a geographical location on the street - right below the Furry Arms Hotel, with a neon sign outside in the alleyway. The location was last seen in Season 31.

Birdland is based on a real jazz club that was inspired by famed musician Charlie Parker, whose nickname was Bird and who served as the headliner for the club. The original Birdland was in operation from 1949-1965, but a club with the same name opened in 1986. 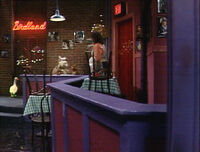 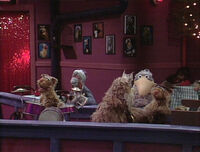 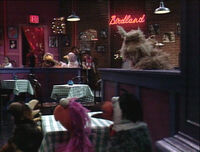 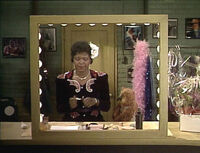 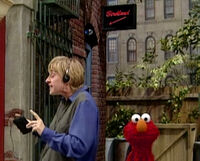 Wikipedia has an article related to:
Birdland (jazz club)
Retrieved from "https://muppet.fandom.com/wiki/Birdland?oldid=1265849"
Community content is available under CC-BY-SA unless otherwise noted.