Blind Pew is a threatening pirate who hunts for Billy Bones in Muppet Treasure Island. As in the original Treasure Island, Pew is after the treasure map, accompanied by other former members of Captain Flint's crew. In contrast to the novel, where Pew's blindness enhanced his sinister qualities, his disability renders him a comic figure, grasping at a moose head and mistaking Jim Hawkins for a girl. He also speaks with a French accent.

Blind Pew visits the Admiral Benbow Inn to give Billy Bones the black spot, indicating that Bones will soon die. He later returns with a gang of pirates, searching for Bones' treasure map. A lamp gets knocked over in the ruckus, setting the inn ablaze. Pew is last seen wandering blindly through the flames, saying, "I think I smell something burning, no?"

He also appeared in the Muppet Treasure Island video game and as a gulag prisoner (sans eyepatches) in Muppets Most Wanted. 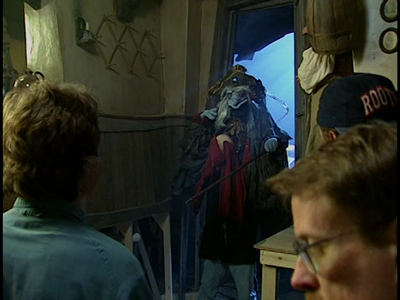 A behind the scenes look at Jerry Nelson performing Blind Pew in a clip from the "Hidden Treasure" commentary. 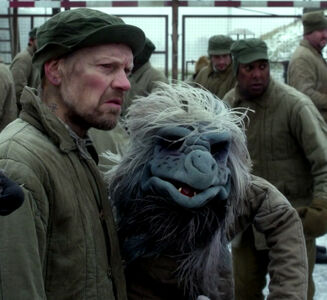 Blind Pew as a gulag prisoner in Muppets Most Wanted