Bluki is one of the Muppets from Barrio Sésamo, the Spanish version of Sesame Street; he appeared on the show from 1996 to 2000.

Bluki was the name chosen by the audience through a telephone survey, between a list of five names. Two of the options were Max and Tristán.

Bluki was a blue full-body Muppet who seemed catlike in some aspects, mainly the pointing ears. He was the main star of the series during his period.

Bluki was a childlike Muppet, similar to Caponata and Espinete, who made friends with all the characters interacting with him. These, in turn, encouraged Bluki to learn. Bluki was specially friends with Vera, a small yellow monster. He was also friends with "adult" Muppets Bubo, an intellectual owl and Gaspar, a smiling guy. He did not have a childlike voice. 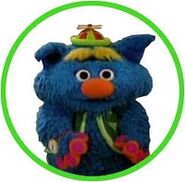 Add a photo to this gallery
Retrieved from "https://muppet.fandom.com/wiki/Bluki?oldid=1081567"
Community content is available under CC-BY-SA unless otherwise noted.