Vincent Edward "Bo" Jackson (b. 1962) appeared on Sesame Street in a Season 22 sketch spoofing the Nike "Bo Knows" commercials, along with Bo Diddley and Bo Peep.

Jackson also appeared in the celebrity version of "Monster in the Mirror".

A picture of Jackson appeared on Gonzo and Fozzie's blimp in the Muppet Babies episode "Get Me to the Perch on Time." 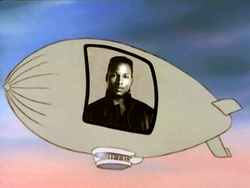 Wikipedia has an article related to:
Bo Jackson
Retrieved from "https://muppet.fandom.com/wiki/Bo_Jackson?oldid=1302149"
Community content is available under CC-BY-SA unless otherwise noted.