Bonanza was a television Western which aired on NBC from 1959 until 1973. The series became the second longest-running TV Western, after Gunsmoke. Bonanza focused on the Cartwrights, owners of the Ponderosa ranch, and their attempts to help friends and neighbors in nearby Virginia City.

In 1970, for the second season of Sesame Street, series stars Lorne Greene (Ben Cartwright), Michael Landon (Little Joe), and Dan Blocker (Hoss) appeared in multiple inserts in character, on the Virginia City set, and with their horses. Greene and Landon subsequently did similar duty on The Electric Company. 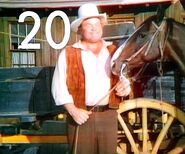 Dan Blocker as Hoss
Add a photo to this gallery

In addition to the three stars, several performers who appeared on the series have also worked in Muppet/Henson productions.

Wikipedia has an article related to:
Bonanza
Retrieved from "https://muppet.fandom.com/wiki/Bonanza?oldid=1284111"
Community content is available under CC-BY-SA unless otherwise noted.