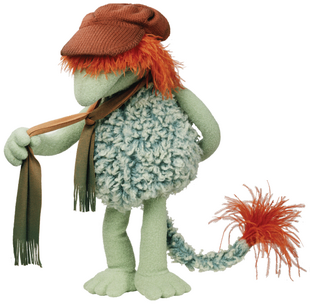 Boober Fraggle is one of the five main Fraggles in Fraggle Rock. He has bluish-green skin and fur, red hair, and no visible eyes. He usually wears a brown cap and scarf.

Unlike other Fraggles, Boober does not like fun and games and spends most of his time worrying about doom and disease. When he's not worrying about himself, he's busy warning others. He is easily frightened and suffers from a variety of phobias like a fear of heights (as seen in "Sir Hubris and the Gorgs" when Boober was at the bottom of the five Fraggles' Sir Hubris disguise). Because of his fears, he is very knowledgeable about health and superstition. He has a lucky charm for just about anything -- often multiples.

Aside from his friends, there are only two things in life that Boober is very fond of: laundry and cooking. Boober is much like a Cave Fraggle, though this may just be a coincidence. It is unknown exactly whose socks Boober is cleaning; the only Fraggle known to wear them is Uncle Traveling Matt.

Boober lives on his own in a hole. He often hangs out with Wembley Fraggle and is easily annoyed by Red Fraggle's endless enthusiasm.

In "Sprocket's Big Adventure," it is revealed that Boober is allergic to dogs.

Inside his dreams, Boober has a fun alter ego named Sidebottom (also performed by Dave Goelz).

According to the episode "Bored Stiff", he also likes to warn other Fraggles of impending doom.

As the series progresses, Boober gradually and notably becomes less pessimistic in personality and eventually begins to appreciate some of the fun things that Fraggles usually like to do!

Boober was named after an angry cow encountered by one of Jim Henson's daughters in Devon.[1] In the language of the ancient Fraggles, "Boober" means "Tie 'em to a rock!"

According to Henson.com's 2006 featured character profile:

According to Boober Fraggle, there are only two things certain in this world: death and laundry. Boober is terrified by the former and fascinated by the latter. He is also paranoid and superstitious. According to Boober, anything that can go wrong surely will, and when it does, it will inevitably happen to him. Boober denies that he is a hypochondriac; he claims he is just practicing the symptoms because he’s bound to get the diseases. But Boober’s negative attitude has a big plus – he can see real trouble coming a mile away, a useful attribute in a land of eternal optimists. Boober’s two joys in life are doing the Fraggle laundry and cooking. He loves spending a fine morning washing socks, an action-packed afternoon watching them dry – and a delightful evening baking up a delectably light radish soufflé to serve to his friends.

Boober Fraggle appeared in A Muppet Family Christmas with the other four Fraggles. He suspected that Kermit the Frog and Robin the Frog are disease-carriers which Kermit stated that they weren't. After singing "Pass It On" with the other Fraggles, Boober gives Robin a pebble, in a show of friendship. He and his friends later appeared during "The Holly and the Ivy" number when they pop up to see where the songs are coming from.

Boober made his first new appearance in 25 years in the Ben Folds Five music video "Do It Anyway," puppeteered by Sean Johnson.

In 2020, Goelz reprised the role of Boober in the webseries, Fraggle Rock: Rock On!, providing the voice while John Tartaglia did the puppetry.[2] In Fraggle Rock: Back to the Rock, Goelz once again voiced Boober with Frank Meschkuleit puppeteering him.[3]

In the Back to the Rock episode "The Glow," Boober discovers his baloobius is glowing. Initially fearful, Boober learns from The Archivist that it's a special gift and he reveals it to his friends.

Jerry Nelson originally wanted to play Boober and asked Jim Henson for the role, but Henson could see Nelson doing Gobo and convinced him to play that role. 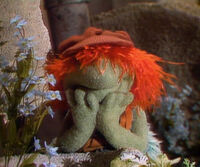 Down at Fraggle Rock. 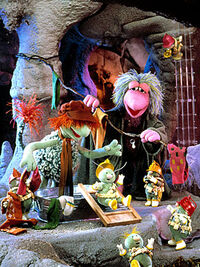 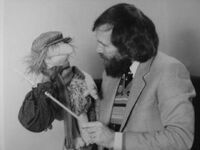