Brad is Zoe's father on Sesame Street. He first appeared in a season 25 episode, and later in the 2001 book I Don't Want to Go to School (reprinted in 2008 as A Day with Daddy!).

He also appeared in the 2007 book Good Night, Tucked in Tight, as well as Zoe's New Tricycle.

Zoe drew a picture of her parents while drawing with Big Bird and Elmo in a season 30 episode. 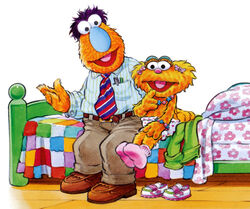 Brad in an illustrated appearance
Add a photo to this gallery

Retrieved from "https://muppet.fandom.com/wiki/Brad_(Zoe%27s_dad)?oldid=1188234"
Community content is available under CC-BY-SA unless otherwise noted.