Branford Marsalis (b. 1960) is an American saxophonist, composer and bandleader. He is the brother of Wynton Marsalis.

He appeared on Sesame Street in the role of Forrest Wimbledon, a jazz musician who plays at Birdland with Hoots the Owl (First: Episode 2834).

As promotion for the 1993 album Muppet Beach Party, Kermit and Clifford made an appearance with Branford Marsalis, Kevin Eubanks, and The Tonight Show band, to sing "Under the Boardwalk". 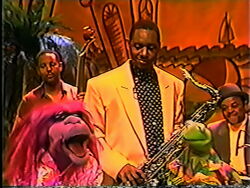 Clifford, Kermit, Branford Marsalis and the Tonight Show Band
Add a photo to this gallery

Wikipedia has an article related to:
Branford Marsalis
Retrieved from "https://muppet.fandom.com/wiki/Branford_Marsalis?oldid=1147357"
Community content is available under CC-BY-SA unless otherwise noted.