Jim Henson and Kermit the Frog made an appearance on the show on July 2, 1986. A young fan, Michael Dixon, spoke to Kermit and Jim on the show; Dixon is known to Muppet fans for his 2002 Muppet fan website, Kermitage.

One of the questions Henson was asked addressed the origins of the word "Muppet". 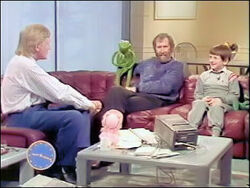 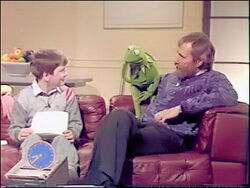 Add a photo to this gallery
Wikipedia has an article related to:
Breakfast Time (show)
Retrieved from "https://muppet.fandom.com/wiki/Breakfast_Time_(show)?oldid=1081726"
Community content is available under CC-BY-SA unless otherwise noted.