Brooks Brothers was founded in 1818 and is the oldest men's clothier chain in the United States. It is headquartered in New York City and is best known as introducing the ready-to-wear suit to American customers. Famous clients have included Andy Warhol, Abraham Lincoln, Barack Obama, Stephen Colbert as well as the television series Mad Men.

In an interview about his film wardrobe, Kermit said, “I was very excited about my new wardrobe, I don’t often wear clothes but when I do I want something classic and expertly tailored. Brooks Brothers was the perfect match and fit for me. Growing up as a tadpole in a swamp with 3,265 brothers and sisters, you can imagine that I had a lot of hand-me-downs. I love the fact that these items were made exclusively for me.”[1]

At the 2012 Academy Awards, Kermit wore Brooks Brothers. He donned his tux again in 2015 for a photo spread inside ODDA Magazine. 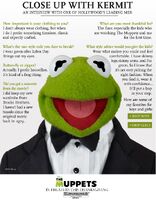 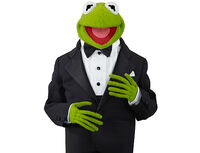 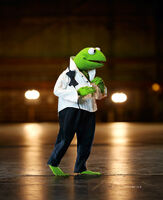 ODDA Magazine photo spread (2015)
Add a photo to this gallery

Wikipedia has an article related to:
Brooks Brothers
Retrieved from "https://muppet.fandom.com/wiki/Brooks_Brothers?oldid=1081759"
Community content is available under CC-BY-SA unless otherwise noted.