"Brotherhood of Man," the big third act number from How to Succeed in Business Without Really Trying, is a song about how all people are ultimately part of the same group and should watch out for each other. The Muppets performed it in the special I Love Liberty to conclude their re-enactment of the Second Continental Congress.

Years earlier, a jazz instrumental version of the song was heard on Sesame Street, as the punchline of a Simon Soundman sketch. After Simon's departure, shopkeeper Marvin remarks that he should have asked his customer to join his band, but instead, he utters a jazzy version of the "Brotherhood of Man" chorus.

The Anything Muppets also sang the song in Episode 0006 of Sesame Street. 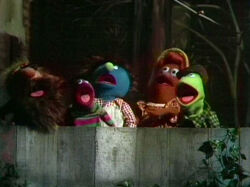