Bruno Tonioli (b. 1955) was born in Ferrara, Italy and is best known as a judge on Strictly Come Dancing and its American counterpart, Dancing with the Stars. On the September 28, 2009 show, Gonzo made an appearance at the judges' table, blowing his trumpet at the end of the The Muppet Show Theme.

Tonioli has choreographed videos, stage shows and tours for many artists and shows, including Tina Turner, Elton John, The Rolling Stones, and the television series Absolutely Fabulous, as well as appearing in Elton John’s “I'm Still Standing” video.

On the Sesame Street spoof "Dancing with Triangles", a Muppet caricature of Tonioli was featured (played by Eric Jacobson),[1] along with fellow judges Len Goodman and Carrie Ann Inaba. 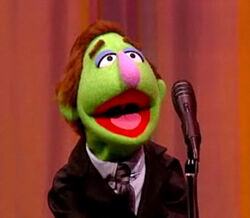 Bruno Tonioli's Muppet likeness
Add a photo to this gallery

Wikipedia has an article related to:
Bruno Tonioli
Retrieved from "https://muppet.fandom.com/wiki/Bruno_Tonioli?oldid=1193740"
Community content is available under CC-BY-SA unless otherwise noted.