Sunny Days Celebration is a Sesame Street stage show that debuted at Busch Gardens in Williamsburg, VA in 2010.

“Kids and their parents can sing and dance along with their favorite Sesame Street friends several times a day during our new Sunny Days Celebration. Join Elmo, Abby Cadabby, Grover, Cookie Monster and Zoe as they take to the Sesame Street Forest of Fun stage for their new song and dance performance.” 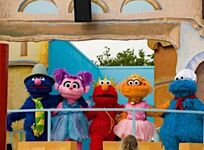 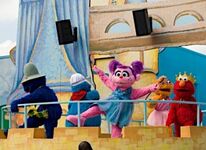 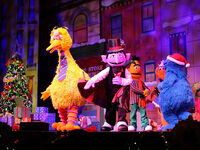 A is for Africa is a Sesame Street stage show that debuted at Busch Gardens Africa in Tampa Bay, FL in 2010.

“A musical performance that brings tales of imagination and adventure to life with Elmo and his friends, performing daily at the Sesame Street Safari of Fun's Sunny Day Theater.” 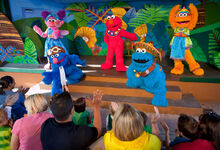 Retrieved from "https://muppet.fandom.com/wiki/Busch_Gardens_stage_shows?oldid=1240314"
Community content is available under CC-BY-SA unless otherwise noted.