Busy City is a children's storybook written and illustrated by Joe Mathieu. The book, published in 1978, takes readers through different places found in a busy city - such as the park, a construction site and the airport.

One spread, pages 10-11, looks at the busy location of a television studio. While the text does not specify the show, the illustrated spread clearly depicts the busy studio of the children's television show Sesame Street. The illustrated scene depicts the taping of a street scene featuring Big Bird and three kids outside in the "rain." Bert and Ernie are also shown, peering out of a window of 123 Sesame Street. Additionally the spread shows the behind the scenes action on the set - including many illustrated cameos of real-life Sesame Street crew members, such as Jim Henson, Frank Oz, Jerry Nelson, Richard Hunt, Will Lee, Chet O'Brien, Jon Stone and Kermit Love, as well as Mathieu himself.

“A Television studio is another exciting place to visit. Stagehands set up the scenery. Actors perform in front of bright lights, big microphones and cameras. Writers, producers, and directors watch actors on studio TV sets. Many people work together to make a television show.”

The illustration credits the likenesses of the Muppet characters to Muppets Inc. stating: 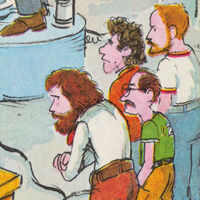 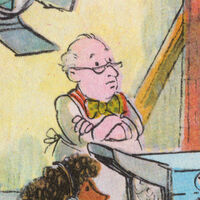 Actor Will Lee watches the taping from off-camera. 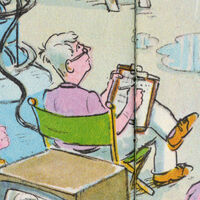 Chet O'Brien serves as the floor director for the scene. 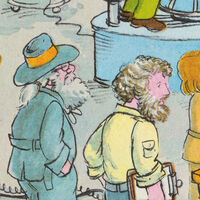 Jon Stone and Kermit Love observe the on set action from the rear. 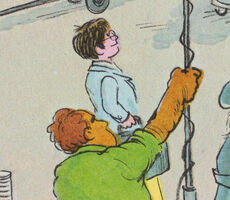 Joe Mathieu inserts himself into the studio proceedings.
Add a photo to this gallery 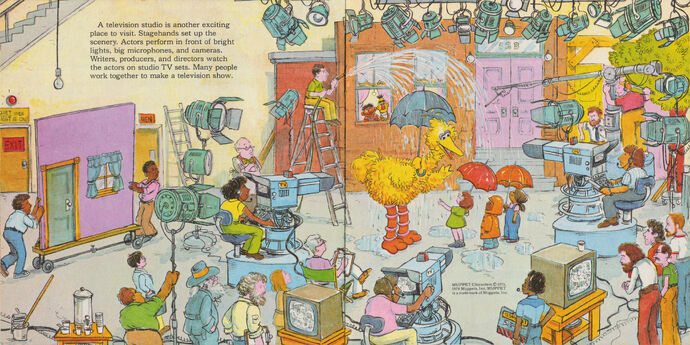 Retrieved from "https://muppet.fandom.com/wiki/Busy_City?oldid=1277453"
Community content is available under CC-BY-SA unless otherwise noted.