Butch is a Bengal tiger who made various appearances on The Muppet Show, starting in season 4. He also appeared on Sesame Street. 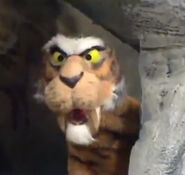 Retrieved from "https://muppet.fandom.com/wiki/Butch?oldid=405554"
Community content is available under CC-BY-SA unless otherwise noted.