Buzz Aldrin (b. 1930) is an American pilot and astronaut who was the Lunar Module Pilot on Apollo 11, the first lunar landing. He became the second human to set foot on the Moon.

Aldrin appeared on Sesame Street in Episode 4090, where he explained to Cookie Monster that the moon is made out of rock, and is not a cookie. He also appeared in an insert with Carmen Osbahr's son Alex,[1] as well as a Healthy Habits for Life segment where Telly dresses himself in an astronaut's helmet. When he comments that he's running low on energy, Aldrin suggests that all he needs to do is eat some food. 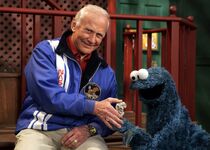 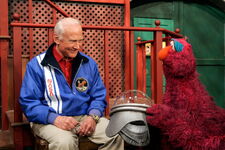 Wikipedia has an article related to:
Buzz Aldrin
Community content is available under CC-BY-SA unless otherwise noted.
Advertisement