The CBC Museum, in the Canadian Broadcasting Centre at 250 Front West in Toronto, Ontario, Canada, is the Canadian Broadcasting Corporation's museum, dedicating to its archival television and radio materials and heritage. It was founded in 1994. The museum's "Growing Up with CBC" exhibit featured the Sesame Park puppets on display, including Basil, Dodi, Chaos and Katie. The puppets' costumes were from the Season 5 episode "Dare to Share".

The exhibit also featured include various props, photos and video clips from Sesame Park alongside artifacts from other famous Canadian children's television shows.

In 2007, the Basil puppet as well as several other puppets on loan from the museum appeared in a skit shown during the Gemini awards.

Basil as a knight in shining armor

Katie as a princess

Chaos as a wizard 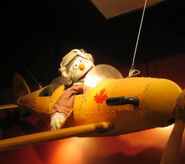 Wikipedia has an article related to:
CBC Museum
Community content is available under CC-BY-SA unless otherwise noted.
Advertisement