When the wind drops, and the Hispaniola begins to drift, the crew go stir crazy out of boredom. The human pirate twosome, Calico Jerry and Easy Pete, are the first to succumb to cabin fever, and the rest of the crew quickly follow suit. Some of the lead characters, including Squire Trelawney and Gonzo, dress up in Spanish-style costumes, and dance around the ship playing maracas.

The wind returns immediately after the song ends and the crew, embarrassed and uncertain of what just happened, immediately disperse and brush off the entire thing.

Long John Silver, Captain Smollett, Mr. Arrow and Jim Hawkins are not seen during this number, so they may be unaffected by the fever. Bad Polly and Mad Monty apparently aren't affected either, but Clueless Morgan heard them singing.

An extended version of the song is included on the Muppet Treasure Island soundtrack, including a line from Lew Zealand, who has no lines in the finished film. 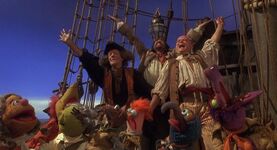 Retrieved from "https://muppet.fandom.com/wiki/Cabin_Fever?oldid=1155525"
Community content is available under CC-BY-SA unless otherwise noted.