Calgon is a maker of bath soaps, oils, and other bath enhancers. In 1988, Calgon produced a line of Muppet bubble baths marketed to kids, each named after a specific character and fragranced like fruit. The original line included Kermit's Krazy Berri Bubbles and Miss Piggy's Pink Bananas, with Fozzie's Wocka Wocka Apple Bath following later. Calgon continued to produce the bubble baths into the 1990s.

In 1996, Calgon rebranded the products to tie in with the release of the film Muppet Treasure Island. The three varieties were renamed "Kermit's Swashbucklin' Berry", "Piggy's Hula Bula Banana", and "Fozzie's Ahoy Apple", and were sold in figural bottles ("soakies") depicting the three characters in their Treasure Island costumes. (Another company in the UK made a different set of Muppet Treasure Island soakies.) 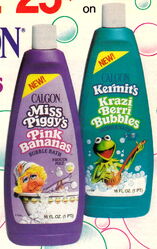 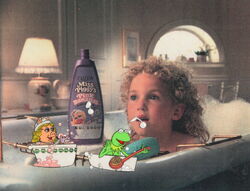 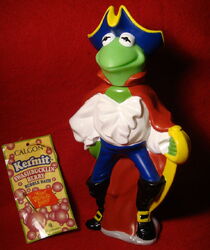 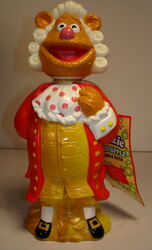 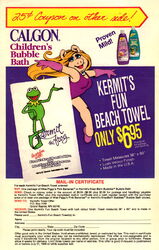 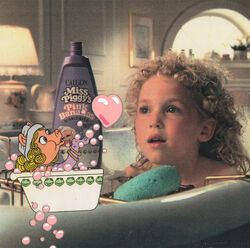 Wikipedia has an article related to:
Calgon Bubble Bath
Retrieved from "https://muppet.fandom.com/wiki/Calgon_Bubble_Bath?oldid=1081974"
Community content is available under CC-BY-SA unless otherwise noted.