Big Bird has gone bird-watching in the park, but now it's time to go home. He asks a passing jogger how to get to Sesame Street, and the woman tells him to go around a statue. He does, but he's still lost. A waste paper collector directs him over a bridge, and then a butterfly collector sends him through a tunnel. Coming out in the dump, the sanitation engineer tells him to go under a billboard. A construction worker sends him down a manhole, where he's flushed out into the river. A man in a boat suggests that he get on a ferry boat, which carries him to shore.

Finally, a policewoman tells Big Bird that Sesame Street is just between the buildings up ahead. Big Bird finds himself back on Sesame Street, where all of his friends have gathered to go bird-watching in the park. They ask if Big Bird wants to come along, and the exhausted bird collapses. 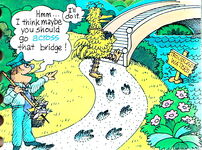 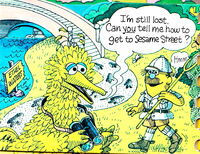 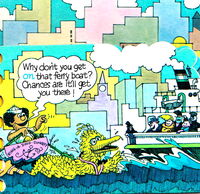 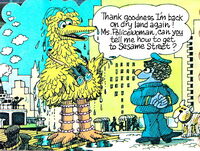 Retrieved from "https://muppet.fandom.com/wiki/Can_You_Tell_Me_How_to_Get_to_Sesame_Street%3F_(1975_book)?oldid=1069762"
Community content is available under CC-BY-SA unless otherwise noted.