Candle was one of the "Dragon Time" puppets from Puppetman. Candle was described in the script as "an adorable baby dragon who talks with a bit of a lisp." Candle pops out of the clock tower to announce "It's Dragon Time!" in the opening theme song. He doesn't resurface until late in the pilot episode, where Gary uses Candle to speak to his own son, Zack. Candle is the most child-like and innocent of the "Dragon Time" cast, though the pilot insufficiently defines his relationship to the rest.

Candle is a Hand-Rod Muppet. Though an original character sketch shows Candle in an oversized top hat, the final character is naked, perhaps reflecting both his infant-nature and his innocence. 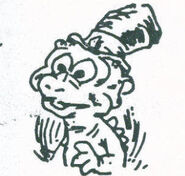 Original character sketch
Add a photo to this gallery
Retrieved from "https://muppet.fandom.com/wiki/Candle?oldid=1082036"
Community content is available under CC-BY-SA unless otherwise noted.